Roonwit has been digging around the EU Trademark site and found a total of 24 titles that were registered by Stone Connect which we suspect is a stand-in for Warner Brothers:

What do I think about the new title?

Last night Mel asked me to write a blurb about what I think of the new title Harry Potter and the Deathly Hallows. Since I really have no idea, even after 3 days of research, this was difficult. Here's what I sent her:

I am still struggling with what it may signify and I suspect that like 'Spinners End' it is unguessable. The words are somber, archaic, poetic, even melodramatic -- and incomprehensible to me, even after reading many excellent theories. My best guess is that the Deathly Hallows is both an ancient, powerful place and an object or objects. If you press me I will say that the Department of Mysteries or the Forbidden Forest may hold the key. And I really want to know what her other two titles were.

Be careful what you ask for. This morning Pablo from Harry Potter Latino sent me a heads up that he had discovered three titles that had been registered on December 5th with the UK Patent Office! The registrations are legitimate, but are they really true alternatives, or are they smokescreen for wily researchers like Pablo? Heh. Just what I need, another imponderable before I've even had my coffee. The other two titles he found were "Heart of Ravenclaw" and "Deadly Veil." They are identical to the registration for "Deathly Hallows." Mil gracias, Pablo!
Posted by Unknown at 10:08 AM No comments:

Something that becomes clear to anyone who reads all these interviews is how patient Jo is as she is asked the same questions over and over and over again.
Posted by Unknown at 9:41 PM 1 comment: 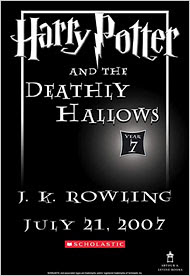 So now everyone knows the title of book 7 is Harry Potter and the Deathly Hallows. Although none of Jo's titles have been guessable before (Prisoner of Azkaban, for example), I can't help but ask: what can it mean?

From the Oxford English Dictionary
Deathly as an adverb: Resembling death ("deathly cold").
Hallows as a verb: To make holy or set aside for God ("Bring their candles to be blessed and hallowed").
My interpretation? a blessing ceremony that turns deadly or looks like it does -- which doesn't work because it is too overtly religious.

Deathly as an adjective: Causing death, resembling death or pertaining to death ("deathly mists," "deathly stillness" and "His wounds, many and deathly").
Hallows as a noun: A saint (All Hallows=All Saints), a saint's shrine or collection of relics (can also be pagan relics). Note: The noun is usually plural.
My interpretation? a powerful place or object that appears death-like or causes death.

So I suspect that this has something to do with graves (as others have noted, hallowed ground), either those of the founders, or of Harry's parents. It could also refer to a place where relics of the founders have been collected. I don't think the title was meant to be overtly religious.

Could "Deathly Hallows" refer to the veil? Jo told us last year that

We have never learned the official Ministry name for it, so it is possible it could be called the Deathly Hallows.

Why not use 'deadly?' 'Deathly' is more poetic and old-fashioned than 'deadly.' It could be that she thought 'deadly' was too melodramatic sounding, or the Hallows could be an old place with an old-fashioned name. I also think she was researching uses of the word 'death' when she chose the name for her October Wizard of the Month: Lorcan d'Eath.

Hallow? Hollow? Jo probably expects us to confuse hallow with hollow. They sound alike, and she has deliberately used sound-alikes before (Kreacher, Diagon Alley, etc.) to flavor our mental images. Remember, in her 10/31 diary entry she said "I've now got a third title. [...] Title three currently ahead by a short nose, or perhaps that should be a vowel and two consonants." I'll bet one of her earlier titles had hollow in it, not hallows. Etymologically, they *are* connected as old-fashioned ways to shout hello, especially while hunting. (Thanks to NanB, a Lexicon reader, for reminding me of the diary entry).

Arthurian Hallows? There is so much speculation on the Leaky Lounge and the Lexicon about the 13 Arthurian Hallows that I have been reading scholarly articles about the Arthurian/Irish hallows all night. Maybe the articles have made me grumpy, but I think that though this may be the kernel of what gave Jo the idea for a Hallows, she isn't going to adhere slavishly to the Arthurian symbolism. What am I reading?
Loomis, R.S. "The Irish Origin of the Grail Legend," Speculum, Vol. 8, No. 4. (Oct., 1933), pp. 415-431.
and
Wood, Juliette. "The Celtic Tarot and the Secret Tradition: A Study in Modern Legend Making,"
Folklore. (1998).
Posted by Unknown at 12:56 AM No comments:

A new puzzle reveals the title of Book 7!

ZOMG, the locked door is open again on JKRowling.com (click on the pink eraser), and she has told us the title of Book 7! I won't spoil it here in case you want to try to solve the puzzle. My friend Bel has puzzle hints over on the Lexicon.
Posted by Unknown at 11:35 AM No comments:

Jo tells us today on her website that she is hard at work writing Book 7, but that she is "alternately elated and overwrought" to be writing scenes she planned as much as 12 years ago.

I know as a reader I have mixed feelings too. Reading the last book will be wonderful, but also like forcing yourself to say goodbye to friends and a world you know you won't see again. Jo has been firm that the series ends with this one with the possible exception of an encyclopedia of her wizarding world for charity.

Jo also wrote about a dream she had that may or may not give clues to how one hunts for Horcruxes.

In her "Rumours" section, Jo squashed another theory, but it wasn't one that had big play on the forums. It was a theory that was probably based on the alchemical interpretations of the stories because it proposed that Harry and Voldemort would combine into one being.
Posted by Unknown at 8:54 AM No comments: