Have I mentioned that I was looking forward to hearing Dr. Henry Jenkins speak? I missed his talk at Azkatraz because I was a vendor last year, so I was very glad to see that he would speak at Infinitus. 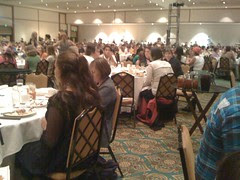 But it was Day 1, so first the Welcome Feast, our first chance to see old friends and who-was-dressed-as-whom. This was my first conference with my husband and our niece. My shy husband was gamely dressed as an "anonymous Auror:" brown-striped pants, old fashioned shirt with a button-on collar, loosely-knotted scarf, and a wonderful bowler hat. Our niece wasn't in costume, but she did a good job of teasing her uncle out of his nervousness.

We shared the table with Bel and her daughter, and some women I hadn't met before. Conference organizers with walkie-talkies were making sure the 2,000+ guests made it through the buffet lines (Mexican chilaquiles, not chipolatas), a belly dancer ondulated at the sound booth, and a VIP table of the keynote speakers stretched along the front of the room. Perhaps there were no floating candles or half-breed giants, but we had a few ghosts, some professors, a heavily pregnant Hermione, and a couple thousand potential friends. It had begun!

I picked up my press pass from Aziza, and headed to Dr. Jenkins' talk. His topic this year was "When Fans Become Activists." In case you didn't know, a Potter fan organization named the Harry Potter Alliance (in coalition with several other fandoms) ended up raising an astounding $123,000.00 for the earthquake relief efforts in Haiti ("Helping Haiti Heal"), and more recently was awarded $250,000 from Chase Community Giving, the top prize in their 2010 campaign. The HPA's motto is "The weapon we have is love."

Dr. Jenkins is so fascinated by these efforts and those of other fandoms, that he will be working with the MacArthur Foundation to study youth and activisim, specifically those organizations that approach activism as a part of a fandom, as he said, "From reading, to writing, to changing the world." Jenkins tour de force talk ranged from Na'avi-blue painted Palestinian protesters to Medieval protesters masked as moors or amazons, to Oilspill Spongebob, to WoW in-game protest marches in China, to Singapore where censorship of political speech led to widespread use of videotaped action figures as stand-ins.

He blasted Bowling Alone as a "dead metaphor." I wanted to stand up and cheer.

As a public librarian, I thought one of his more interesting observations was that participation in afterschool programs have a huge effect on activism. Band, theater, choir, etc., according to Jenkins, "creates a literary space that looks a lot like a fandom. The kids don't think of themselves as political. They see themselves as cultural, then shift as a result of a fandom." I would argue not just the fandom, but also the realization that as a unit they have some power to work for change.

In the question and answer period, someone asked about the tension between charity and activism. Jenkins explained that semantically, "charity" is a dismissal of a movement's political force; it is also a gender-laden term. Andrew Slack pointed out that it was important to the HPA that all approaches be welcome -- the HPA's role is to provide structure and fundraising/advocacy help, not dictate whether activity is a "charity" or "activism." Andrew sees the next stage as one where fandoms join forces for good, as they did with Helping Haiti Heal.

Jenkins ended by mentioning that a new journal named Transformative Works and Cultures had a call out for papers. 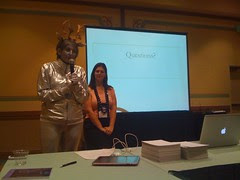 Next was a clever bit of fun "The Blair Witch Law Firm Discusses Wizarding IP Law" by Heidi Tandy and Rachael Vaughn. Heidi and Rachel (dressed as a silver doe Patronus), both practicing lawyers, announced that they are opening up a London office of the Blair Witch Law Firm, representing both wizards and muggles.

They were there to present an overview of Wizarding IP Law, answering questions such as: Are spells patentable? Do ghosts retain copyrights to their creations from the 1600s? and Is the Invisible Book of Invisibility tangible enough to be copyrightable? Some gems: Memories stored in a Pensive are copyright protected, but "leaking" ones are not, and House-elf work is owned by their owner. More work for Hermione, I guess. The section on trade secrets touched on the legal aspects of Secret-keeping. Hee.

The Auror and I had tickets to the Merlin's Circle Reception where I met Naomi Novik, the author of the Temeraire series (swoon), and actor Chris Rankin (Percy Weasley), as well as some of the amazing HPEF conference organizers, Aziza, Heidi and Gwen.

Unexpectedly, I was approached by a young woman who asked me if I worked for the Lexicon. I don't know how she knew, but we had a great conversation. She was visiting from New Zealand (!) and was hoping to find a copy of our book while she was in the states. I told her I didn't think they were available anymore except from Amazon, but that I had one in my luggage. Bel and I signed it the next day, so she has her copy of the book.

And finally we had time to visit the Vending Room and the Craft Fair. What did I buy? A spiffy bezoar necklace, a couple of pygmy puffs crocheted by a 14-year-old girl, and some fun stuff from Whimsic Alley: a wand scabbard, a "Bad Dobby" button, and other gifties for friends back home (shhh). However the loveliest thing was a numbered (10/50) and signed Mary GrandPre map of Hogwarts from ArtInsights Gallery. I see it as a companion to Riikka's drawing; the detail is amazing. Thanks luv. Merry Christmas to you too!

P.S. Apologies for the poor quality of the photos -- they were taken with my cellphone. My niece lent me her DSLR later on, so the photos *will* get better.
Posted by Unknown at 1:07 AM 1 comment: