Here is your sneak peek at the new Accio Quote!
http://www.quick-quote-quill.org/AccioQuote/

Yes, I know not all the links work yet. We're still finishing up.

This weekend we converted 355 webpages from 2 websites, and revised the artwork and navigation. Whew!
Posted by Unknown at 5:18 PM No comments:

Email ThisBlogThis!Share to TwitterShare to FacebookShare to Pinterest
Labels: AccioQuote

Changes are brewing at Madam Scoop's and the QQQ!

Until now, the Quick-Quote-Quill and Madam Scoop's were "in essence divided" even though I was maintaining both. Well, I decided to stop letting myself get distracted by all the fun stuff going on at the Lexicon and do what I have been planning for 2 years: combine the QQQ with Scoop's.

To mark it's metamorphosis, there will be a name change to Accio Quote! Something else we have been planning for a long time.

But hallelujah, I'm not doing this alone. I have the pleasure of announcing 2 new colleagues: Mike Gray (yes, THAT Mike Gray, the guy who created the QQQ), and Michael Young, better known as Roonwit.

The new site isn't launched yet. I am still trying to figure out the best way to do the navigation, and then I need to wait until the Floo Network server admins have the time to hook up the new URL. I'll keep you posted.

In the near future the two sites will be melded into one big database. Thanks to our former programmer Serge, we have a good start.
Posted by Unknown at 6:28 PM No comments:

Email ThisBlogThis!Share to TwitterShare to FacebookShare to Pinterest
Labels: AccioQuote

I thought I would share my list of fan artists. Some have given the Lexicon permission to reproduce their artwork, some haven't and some haven't been asked (but might -- it's not my decision).

http://del.icio.us/madampince/fanart
Posted by Unknown at 9:36 AM No comments:

Makani made my day today. It was an OK day. Pulled weeds, went to work, grocery shopped and came home, but something made me check my subscriptions to friends' Livejournals and Harry Potter fanartist Makani (Heather Campbell) had posted no fewer than 4 new Potter drawings (3 canon and 1 gloriously noncanon of a goth Ginny) and a portfolio she drew while at the zoo.

Why is simply viewing creativity like this as good as a Cheering Charm? One of the reasons I enjoy Harry Potter fandom so much is because it seems to compel people to write, draw, sing, film, in response. Me? I make lists =). Artists rock. 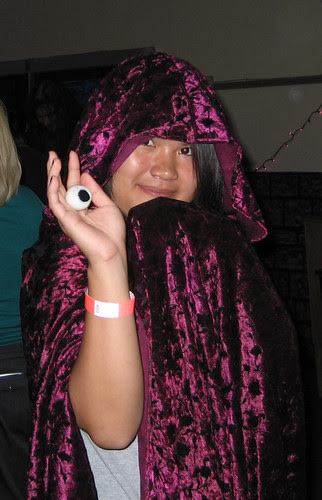 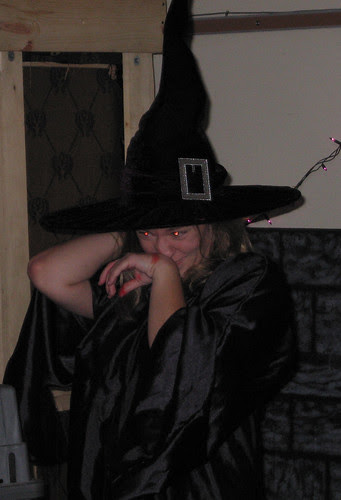 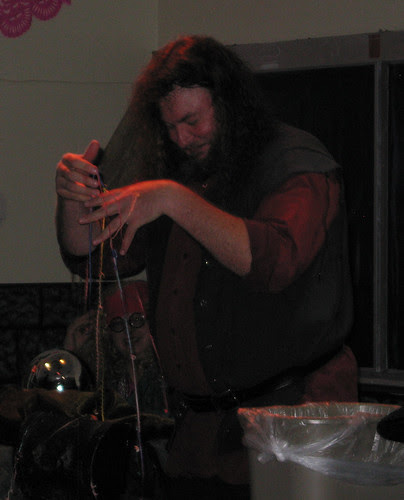 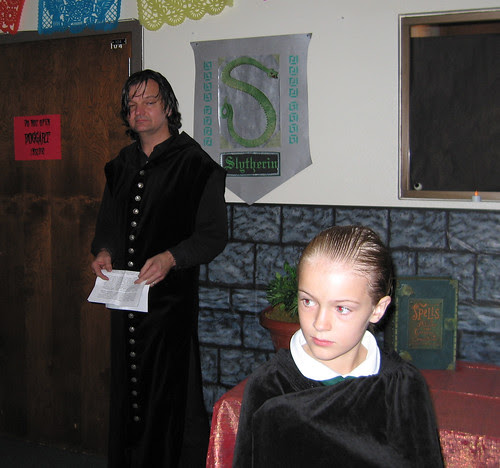 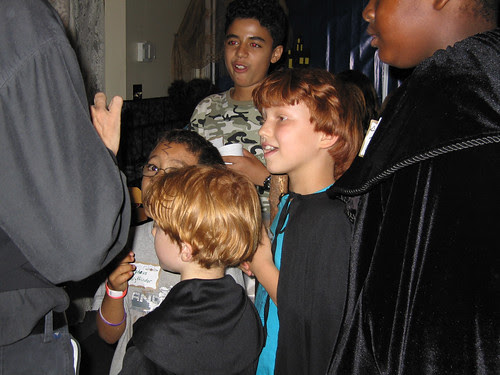 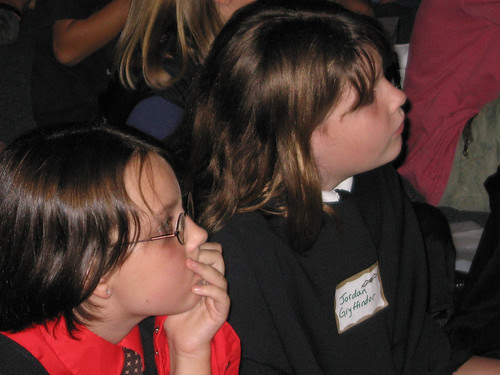 Here are some photos from the party...
Posted by Unknown at 10:34 PM No comments:

Wow. We really pulled it off! Almost 100 people came to my library's Potter party, and oh, what fun it was!

When kids arrived we gave them a packet with trivia games, the Hogwarts school song, a raffle ticket and a wristband. I had decorated the table with a big piece of black fur, a handmade Monster Book of Monsters, and the coolest "flame" lamp that I found on the internet.

The room was pretty simple. We had put up a fake stonework dado on the lower half of the wall. Thania made some delightful Hogwarts House banners, purple lights hung from the ceiling, and Trelawney's nook was lined with a flickering "flame" lamp, old lace tablecloths and scarves. Other tables just had black plastic with hologram confetti sprinkled for sparkle. The food table was decorated with 2 huge spiders but that didn't deter anyone from helping themselves to licorice wands, pretzel wands, oatmeal cookies and Belinda's Burpless Butterbeer. I was puzzled as to what to do with the bulletin boards: one became a window onto a nighttime landscape; on the other (covered in white butcher paper) people were invited to write a letter to J.K. Rowling.

Hagrid (Fergus) knows how to hold the attention of 10-11 year old kids. He taught a class in care of magical creatures. His table had various floating specimens in peanut butter jars, an exploding frog (sadly, it later exploded) in a chest, a kitty crate from a baby boggart that needed to be cleaned out with what appeared to be green slimy droppings, and ziplog bags labeled "Bog dirt" and "graveyard dirt." Bog and graveyard dirt are apparently ingredients for a mash fed to baby boggarts. ew. Other ingredients included unicorn droppings and something so gooey and purple that I didn't *want* to know what it was. He then made everyone's stomach turn by testing a nibble to see if it was OK. Throughout the evening he could be seen offering the mash to everyone. It tasted surprisingly like purple gooey chocolate cake.

Simon Wayfarer the from the Ministry of Magic's Dept. of Education was next. He flossed people's ears, amazed with rope tricks, and did a truly amazing levitation illusion. I can't believe I missed the bit with the vanishing box! Simon is also a member of the Celtic group The Whiskey Bards. I hope to hear them perform soon.

Madam Trelawney told fortunes next, and had us in stitches with her (mis)fortunes like "For the next 5 years the only part of your body that will grow will be your nose" and "Your dog will win best of breed at the Westminster Dog Show in the werewolf category." Was that sherry in your McDonald's cup, my dear?

Professor Snape proved to be a surprisingly good teacher of the Patronus. We all pointed wands (some pointed licorice sticks), thought of a happy moment and shouted "Expecto Patronum" together, which was amazingly empowering. It was also cool to hear what kids said their "happy moments" were. Unfortunately something went wrong and Snape was forced to sing a song! I believe it went to the tune of the Animals song "Don't let me be Misunderstood."

Other professors attending included Professors Sprout (Thania) and Moody (Dennis); I played Molly Weasley in red hair, dowdy shoes and a full bib apron from the 1950's. My job was to make sure everyone got fed (successful) and to keep Hagrid in line (a glorious failure). Thanks also to teen volunteers Yun and Jessica, and to my colleagues Roxanna and Bethany. It wouldn't have happened without you!

Favorite moments included two third grade girls who came in capes their moms made and the sweetest striped stockings. And when Cepheus took 10 points from a Ron Weasley who was heckling Simon's magic act. Next year we should have prefects!

Then we had our doorprize raffle of cool stuff courtesy of Scholastic Bookfairs, and it was all over. Well, except the clean-up. sigh.

Gawd, I love working with creative people who give it their all. It's just such a joyous thing. Pictures coming soon.
Posted by Unknown at 10:27 PM No comments:

Well, our Potter party is in 2 days! I have managed to dye my hair a lovely shade of garnet (meh) and found the perfect apron to wear as Molly.

In my search for party decorations I visited two Halloween stores. Boy, is Halloween a racket! It's kind of surreal to go into the shops while they're still unpacking. Boxes litter the floor with werewolf arms and legs, spiders are tumbled in another corner, while the mechanized gravestones screech and moan around you. I'm not sure what I'll do with a glitter spiderweb tattoo or gloves that have long, pointed fingertip extensions, but I bought them anyway. I guess I can see why the stores are so successful!
Posted by Unknown at 6:45 PM No comments: