A History of Harry Potter Events in Tucson 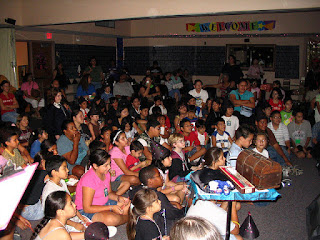 1999
Second and Third Books US release
MTW begins carrying the first two books.
When the third book is released the toy store begins stocking up on all of the books. Unable to get copies from the publisher the toy store sends employees to all of the Costco stores in Tucson. At each store the MTW employee fills a shopping cart to the top with books and then takes it to the checkout. Costco has not forseen the demand and has placed no limit on the number of copies an individual can purchase. The employees deliver several hundred copies of the third book to the toy store which is sold through quickly.

2000
Harry Potter and the Goblet of Fire published in UK and US.
MTW signs a legal agreement at the beginning of the year with Scholastic promising not to pre-sell the upcoming book or reveal information about it ahead of its release date. This is customary for booksellers.

Upon the books release MTW does not receive any books because the Tiggy orders are small in comparison to large corporate booksellers. Scholastic advises that book orders are being filled and shipped as quickly as possible. The toy store employees return to Costco but buy less books than previously.

Mrs. Tiggy Winkles is interviewed by The Tucson Citizen about the Harry Potter frenzy and the article drops the hint of the first Tiggy Winkle Harry Potter Party, a Wizard Fest on August 12th, 2000. The interview describes the growing sales of everything relatable to the books. “ Life at Mrs. Tiggy-Winkles has been consumed by the popular book series and all things Harry Potter-related. The store is full of Harry Potter, from the audio version of the fourth book playing on the sound system to books on the shelves to wizard- and magic-themed items.”

2001
Movie of Harry Potter and the Sorcerer’s Stone released (November)
Mrs. Tiggy Winkles Parties continue to grow. Over the coming years from 2001 onward the Tiggies kick off an Annual “Hogwarts Student Orientation”. The toy store is divided into quarters. In each quarter is a curtained private area where a toy store employee playing the part of a ‘prefect’ guides a group of thirty odd children into a classroom setting. A mock subject orientation is given to help the young wizards prepare for going to Hogwarts in the fall. Local chemistry teachers are recruited from the community to teach ‘potions’.  And professional magicians are enlisted to teach ‘Defense against the Dark Arts’, (one of the more alarming tutorials in which fire is thrown about!) A raptor rehab specialist is brought in to teach the kids about sending and receiving Owls and to give them some hard facts about owls in the Tucson area. There are three owls, two of which are safe for the kids to cozy up to. The events  are sellouts with the toy store threating to exceed its fire code.

2002
Movie of Harry Potter and the Chamber of Secrets released

2003
Harry Potter and the Order of the Phoenix published

2004
Movie of Harry Potter and the Prisoner of Azkaban released
J.K. Rowling launches her website
July: Potter Party at Himmel Library, planned by Beth Rubio
I start indexing the books for myself.
https://www.flickr.com/photos/pimacountypubliclibrary/albums/72157655502351779

Mrs. Tiggy Winkle’s Store Closure
With the 2009 and 2010 downturn in the economy business turns sour. By the time the fallout hits Tucson it is 2011 and the toy store has decided to take a final bow. In a collaboration with The Tucson Pima County Library, Hotel Congress and Bookmans Used Books the Tiggy Winkles help with what will be an epic night for Harry Potter fans. The toy store has held back all of its very best wizarding supplies and magical delights. Although the toy store has been closed for nine days the employees reunite and create a giant wizard supply shop on the long bar in the Hotel Congress main club. Harry and the Potters play two epic shows back to back. At the end of the night the employees give away everything that remains including many fireworks which cause confusion and dismay for the hotel management.

2012
Harry and the Potters perform at Hotel Congress

2013
Harry and the Potters perform at Hotel Congress

http://madam-pince.blogspot.com/search/label/PCPL
Posted by Unknown at 2:30 PM No comments: