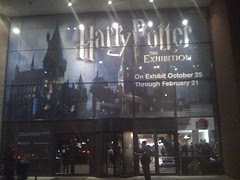 I did something crazy last week, I dropped everything when a friend called and said she had a free ticket to a Harry Potter exhibit.

But it wasn't just any ticket, it was a "Very Important Muggle" preview admission to the Boston Museum of Science's blockbuster, Harry Potter: The Exhibition, 20,000sf of sets, props and costumes from the Harry Potter movies. Even more important, it was a chance to see Bel, someone I've wanted a real hug from for the past several years. Thank you, Bel, for this gift!

The invitation said "confidential" so were pretty sure that we weren't supposed to blog or tweet about it ahead of time, though it was very hard keeping quiet. I only allowed myself a tweet about packing warm socks, an allusion that even the most fervent Dumbledore fan would probably miss without context.

By 4:30 we were all assembled, Bel, Trish, and Kimmy, and I. Bel demonstrated the unfathomable depths of her tapestry bag more than once. Wand? yes. Asprin? yes. FictonAlley chapstick? yes. It would seem to contain everything except a portrait of Phineas Nigellus. It was like old times.

Other news was appearing on the wires: actor Matthew Lewis (Neville), was in Boston for the press party that afternoon, were he had news of the ongoing filming of "Harry Potter and the Deathly Hallows." Would he be there in the evening too? (the answer was yes). Which of our Potter friends would be there? (alas very few, it seemed to be mostly supporters of the museum).

It was a gorgeous evening. Unbelievable weather for Boston, really. We looked it up and it was only 5 degrees cooler than Tucson.

6:30 finally came. We picked up our V.I.M. badges in the Museum lobby and went exploring. Our entrance time was 7:05. 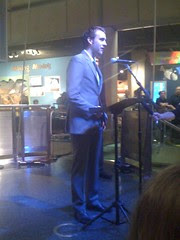 The reception was very nicely done. Museum staff were teaching about live toads and rats; they were also demoing a snake and an owl. In another area there was light food, wine, and later, a quartet playing themes from the Potter movies. Pretty soon we could see Matthew and museum bigwigs arrive, and everyone gathered around a small stage. First the Museum of Science Director Ioannis Miaoulis spoke, then Matt Lewis. No time for autographs, drat it, but it was lovely to see him in person.

7:05! We stood in line for a bit then -- enter! We were whisked off by a cheery welcome witch who sorted a few of the children. Soon the doors behind us opened and we entered a small dark room where we were shown a short film with highlights from the movies. Again, a surprise door opened, and ... goosebumps. Mist, and a red steam engine with more beyond [cue swelling Potter music].

What can I say? See the show if you can. You will be amazed by level of craftsmanship not visible on film. Everywhere there are humorous details to rival Rowling's, and evidence of the care that went into the design of everything from potions bottles to Educational Decrees. Verisimilitude. Are all movies like this, or were these set designers as inspired and as obsessed by the detailed nature of the stories as the most hardcore fan?

I wish I could have taken pictures, but they weren't allowed. The few I have are on my flickr account.

Soon I will write more about the highlights.
Posted by Unknown at 12:54 AM No comments: