On 'mood wolves' and drawing 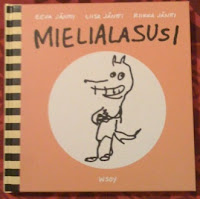 Have you ever tried drawing with your eyes closed? Finnish children's book writer and illustrator Riikka Jäntti makes it a regular exercise.

She visited me a few years ago, arriving in Tucson after taking the train from NYC to Flagstaff, via Chicago. Her sketchbook was filled with exquisite, funny, incisive pen-and-ink drawings of America as seen from the window of a train: diners and fast food joints, tenements, laundromats and corn fields. She told me that the other young people on the train were glued to their laptops and phones while she was glued to the window, soaking it all in.

I got a little nervous as her drawings began to show the southwest. What would it reveal of her thoughts? Well, Flagstaff was dead-on: quaint and funky with a bit of snow on the ground. Then Riikka turned the page and the drawing of the Grand Canyon took my breath away. And another page. Another drawing from the same vantage point, but this one bounced and quivered and provided its own soundtrack. "I did this one," she said, "with my eyes closed."

She pointed out to us the 'moodwolves' that appear on her sketches a la Oliphant's penguin, offering commentary on the scene, or on the quality of her dinner that day. In another scene at the Metropolitan Museum the moodwolf grumpily complains about the dreadful frame on Van Gogh's Starry Night. I didn't realize it at the time, but Riikka draws all of the moodwolves with her eyes closed. 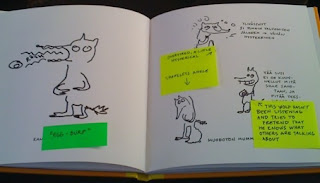 Riikka's new book, Mielialasusi (Helsinki: WS Bookwell OY, 2009), collects the moodwolves that she and her sisters Eeva and Liisa have drawn over the years. The book informs us that "the wolf must be drawn eyes closed, so that it's easier to focus on the current mood."

The book is organized by moods, which are really more like states of being: "Every-day wolves" (just woke up, crowded in a tram), "Pub-wolves" (too many whiskeys, nostalgia), "What I'd like to do," "What I could do" (I love the "I could read more books!"), What I'm going to do (finish all the sewing), and so on.

She thoughtfully and hilariously subtitled it for me with post-it notes. The page spread shown above is "Egg-Burp" "Overtired, a little hysterical," "Shapeless ankle," and "This wolf hasn't been listening and tries to pretend that he knows what others are talking about." Heh. I've NEVER done that! 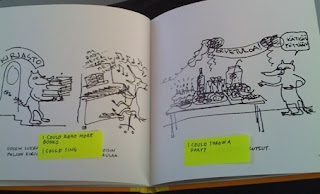 At the back of the book she and her sisters thoughtfully left pages for their readers to start drawing their own wolves, inviting them to "Have a Wolf-moment every day. It only takes two minutes."

I'm off to have a Wolf-moment myself.
Posted by Unknown at 10:41 PM No comments: 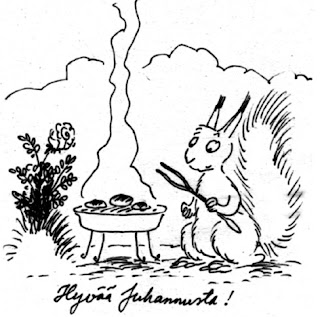 Riikka sent me this drawing of a squirrel celebrating midsummer. He looks like he's not quite sure if the burgers are done!

Next I will post some scans of her newest book, one she created with her sisters Liisa and Eeva.
Posted by Unknown at 10:28 PM No comments: 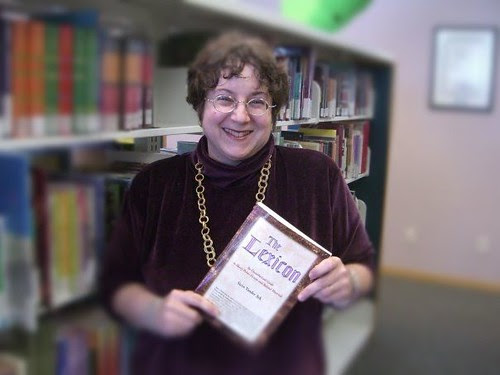 I'm not sure if anyone is still reading this blog, but here goes...

Here's what's been going on. Our book The Lexicon: An Unauthorized Guide to Harry Potter Fiction was published in mid-January. I don't have any sales figures yet but my friends sure bought a lot of them =) and our local bookstores -- both chain and independent -- displayed it prominently.

For me personally, this victory was tempered when my mom got sick in November and died in April. I was able to show her a copy of the book, but oh well, you know how it goes. It was wonderful to have the family all together again, and I am comforted by knowing that mom had a good life and was loved by many. Miss her though.

Steve came out in March for the wildly successful first annual Tucson Festival of Books. Steve's talk was standing-room only and got great reviews, and I think I just *glowed* when I saw the line that formed afterward at our signing tent. Next year will be even better -- I'm on the committee that selects the children's and young adult authors and illustrators!

And now? Steve will have a booth for the book at Azkatraz, and he's invited me to come help. Not one to turn down free registration, I've booked a hotel room and am looking for a quiet person (well, female) to share it with. Anyone want to come to a Potter convention in San Francisco? There's some really exciting programming and a huge Wrock fest!

But before that, our library will again be putting on 2 more Potter parties. Our first planning session is tonight. One date is still undecided -- I will post an update when everything is confirmed.

More news coming, but for now I need to get ready for work!
Posted by Unknown at 9:45 AM No comments: