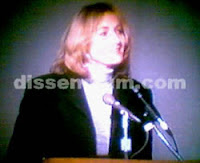 AQ reader Julia Crimmins has been researching the origins of the video from Dissendium we told you about a little more than an month ago. She has determined that it's source is a video called "The Magical World Of J K Rowling - Author Of Harry Potter" published in the U.S. in 2000. Furthermore, it contains additional video of Jo (wearing the same outfit) signing the American edition of Harry Potter and the Prisoner of Azkaban, so the video excerpt would seem to date to October 1999 when she was touring the U.S. Solid sleuthing, Julia!

Later edit: I forgot to mention that you can also read a transcript of the video excerpt.
Posted by Unknown at 11:49 PM

There is also additional information in that video. mainly about jo's favorite charechters, who she likes to write about, the film adaptations and GOF.

I sent a transcript a while ago.

I can send it again if need be

Jules, we've had a transcript from the folks at dissendium -- it's here: http://www.accio-quote.org/articles/undated/dissendiumvideo.html

I will double-check what you sent to see if it is more complete.